‘Back to the Future’ Cast Reunion 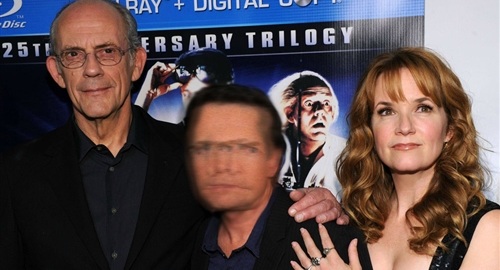 It has been 27 years since the release of “Back to the Future” a blasphemous infidel movie about a Jew scientist and his teen boy lover defying the speed limit and Allah’s laws of time and space.

As you can see, Allah in his infinite wisdom has punished each of the actors from the film with afflictions for their heresy. Christopher Lloyd now requires glasses for nearsightedness, Lea Thompson is suffering from chronic split ends, and of course Michael J Fox was famously diagnosed with homoqueeritis (a disease which causes him to shake uncontrollably whenever he is lusting for another man’s penis).

Yes Allah’s punishments are severe but unquestionably just. Hollywood actors would be wise to look at the cast from “Back to the Future” before they consider starring in any movies belittling Islam and the holy space-time continuum.