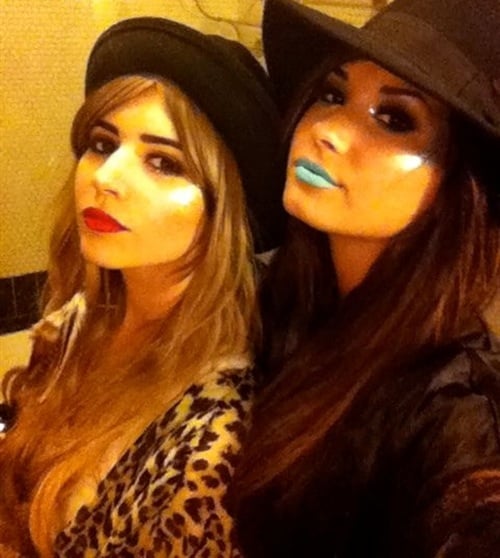 With the release of the new Smurfs movie just days away, former Disney star and desperate fame whore Demi Lovato appears to have sucked off one of the tiny blue mythical creatures in the hopes of furthering her career.

As you can see in the photo above, Demi Lovato’s mouth is crusted over with blue Smurf spunk as she poses for a pic with a dyke she just met at a biker bar. No doubt in Demi’s sick infidel mind she thinks that by orally pleasing one of the Smurfs (probably Papa Smurf), that she will get a movie role in the inevitable straight to DVD Smurfs sequel.

However, that is unlikely to happen as Demi Lovato is fat, and no one wants to see a portly whore running around on the big screen stumping on tiny blue men. They say the camera adds 10 pounds, Demi Lovato must have eaten 10 cameras.