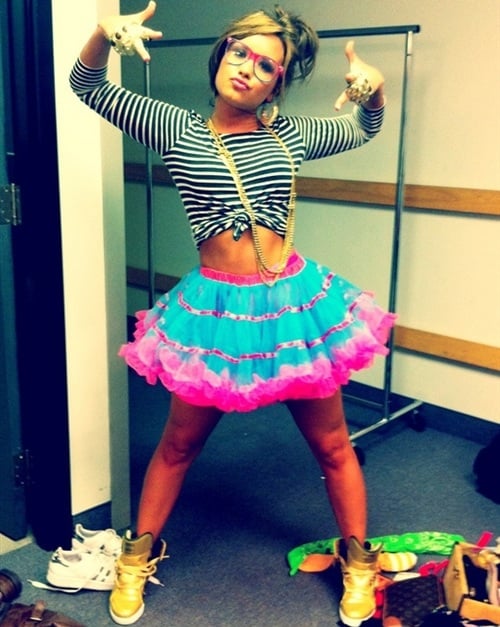 Wow Disney star Demi Lovato is nothing more than an insensitive bigot. Just look how she mocks African American culture in the picture above.

Demi Lovato is obviously trying to be ironic with this outfit. She is saying, “Hey look at me in my stupid multicolored clothing and tacky jewelry. I’m just like a black person.”

Civil rights has come a long way in this country. With the election of an almost black guy as President you’d think that the racism that Demi Lovato is exhibiting would be a thing of the past. I guess people like Demi Lovato just have so much hate in their hearts they can not help but continue to perpetuate racial strife.

What is next Demi are you going to call someone the N-word? Or tell racist jokes like, “What did the black boy give his brother for his birthday? My bike!” or maybe “What is the one positive thing about black people? HIV” or will you go with this classic “Why does Aspirin have cotton in the bottle? To remind black people that they picked cotton before they did drugs.”

Demi Lovato sickens me because she embodies the two things in life that I hate: racism and stupid dago wops.