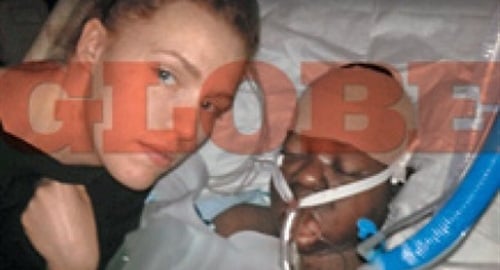 Above is Gary Coleman’s death bed picture which his ex-wife reportedly sold to The Globe for $10,000.

I for one would like to applaud Gary Coleman’s ex-wife for having the good sense to take this picture and profit from it. There is nothing sexier than a woman who has the good sense to see a good business opportunity in even the most dramatic of situations.

What is even more impressive is that she was composed enough to pose in the picture with the dying Gary Coleman. Now that is one level headed woman! Of course the pic would have been a little sexier if she was smiling and giving a thumbs up or perhaps one of those Myspace pouty faces while pressing her tits together.

Gary Coleman’s death was tragic… but only because now when our Celeb Jihad begins there is one less celebrity for us to righteously smite. However, the silver lining is that this picture proves the American public is hungry for dead celebrities, so I’ll be able to make a small fortune selling the pictures from my Jihading exploits.