John Edwards is the Father of His Mistress’s Child 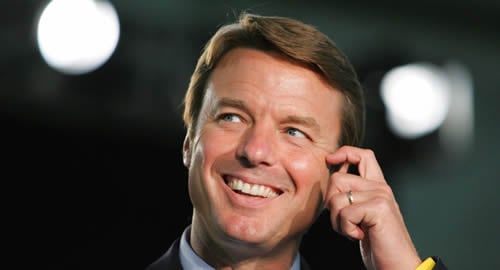 John Edwards, America’s favorite smarmy, phony, sack of s***, hillbilly former Senator is the father of his mistress’s child, the Enquirer is reporting. If true, this will be the second time he has been caught lying to the American public about his extramarital affair.

In 2008 he admitted to cheating on his cancer ridden wife, a charge he had previously denied in 2007 while running for President. During his confession about the affair in an interview with ABC News in 2008, Edwards maintained that the child was not his.

But according to the Enquirer, a secret DNA test has confirmed that he is the father. Whoops! Considering that it was the Enquirer who broke this story and stuck with it through all of his denials, I think it’s safe to say that they did their homework.

I’ve said it before, and I’ll say it again; if you would’ve allowed the man to take four wives, as is stipulated in the Holy Qur’an, none of this would have happened.