Kim Kardashian’s Fat Ass Gets Stuck In A Swing 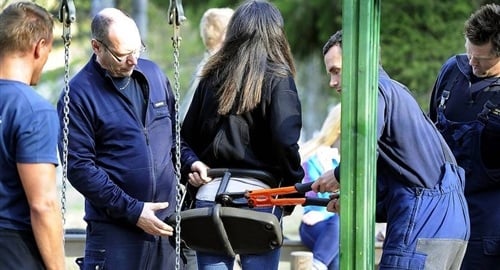 After it was cleared of people, Kim went to a public park with her sister Khloe to share a touching moment in which Kim professes her love of purple crayons and whines about being perceived as a whore.

Unfortunately, as you can see in the photo above, Kim Kardashian’s gigantic ass got caught in a helpless swing. Rescue workers raced to the scene to help extract Kim Kardashian’s ginormous bulbous butt from the swing. However, they were too late, and tragically the swing had to be cut off… and then shot.

If only fat ass whores like Kim Kardashian would be respectful of were they stick their disease infested hindquarters, this senseless loss of playground equipment could have been avoided. Kim Kardashian should be ashamed of herself.