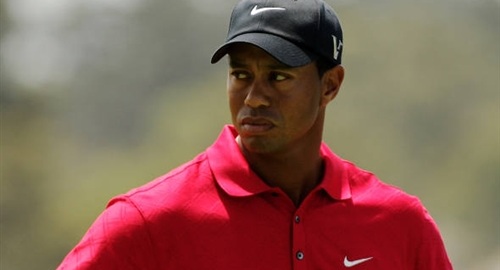 Lock up your whores Tiger Woods is going to be released from sex rehab later today. Tiger’s wife Elin Nordegren is already in Hattiesburg, Mississippi to pick him up.

After completely 3 months of sex rehab were he constantly talked about his deepest darkest sexual urges but was not allowed to act on them Tiger is back on the prowl. I fully expect him to either hit up South Beach or Las Vegas, and bang the first big breasted white trash woman he sees so damn hard her uterus drops out of her vag.

Of course he has learned from his past mistakes and will use protection, and by protection I mean making the whores sign legally binding confidentiality agreements before he violently penetrates them.

I think Tiger’s wife Elin has come to accept that a Tiger can’t change his stripes, and she feels she has succfiently saved what little pride she has by beating his ass on Thanksgiving then making him complete sex rehab. She will now assume the possition of Tiger Woods’ “bottom bitch” and be damn well grateful for the opportunity.