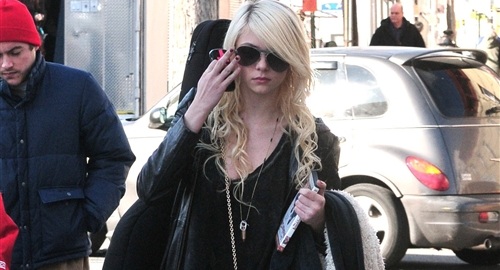 I know what you are probably thinking “Who is that cheap hooker? And would she give me a discount if my friend Gino and I banged her at the same time?” Well I’ll have you know that the girl in the pictures below is not some filthy disease ridden streetwalker, but none other than Taylor Momsen a 16-year-old actress and star of the hit TV show “Gossip Girl”.

Why is this young girl dressed like a gutter skank? Because America is a sick and evil country that is hell bent on selling sex and defiling Muslim women. Taylor Momsen and her hooker tracksuit is portrayed as “cool” and “jiggy wit it” as the kids say. While a beautiful Muslim woman in a respectable black burka is considered a big time “L7 square”.

America is such a backwards country. If I were to go up and beat Taylor Momsen within an inch of her life for dressing like a whore, and provoking me to have impure thoughts I’d be the one who got arrested! I’ll tell you it doesn’t say much for “American freedom” when a guy can’t even protect himself against wanton temptresses.

Anyway here are the pics of Taylor Momsen dressed like a $20 hooker to mock Allah, and make young girls grow up into sexed up hell cats.