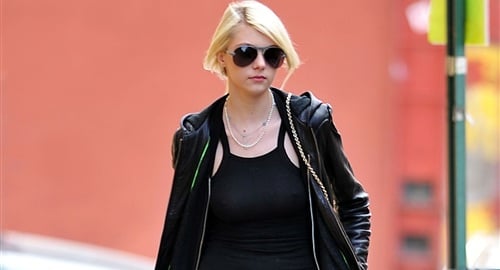 Well it turns out I was wrong about Taylor Momsen. No not that she is a piece of gutter trash, but that she is 16-years-old. Because in the pictures below she is smoking and not wearing a bra. Both of which are illegal for 16-year-olds to do in America.

I am starting to get concerned about Taylor’s well being though. Not because of the smoking, but because of the fact that her waistline seems to be rapidly expanding. I commend her on picking up smoking to try to curve her appetite, but at the rate she is going she might want to start sticking those cigarette stained fingers down her throat as well. Black is supposed to be a slimming color, but the only slimming it is doing in these pictures is to the odds that I’ll be able to rub one out to them later.

Taylor Momsen definitely has a Lohan-esque career ahead of her. Smoking and braless pics of her hard nipples are just the beginning. I can hardly wait until we get to see the good stuff, but until then these pics will have to do.