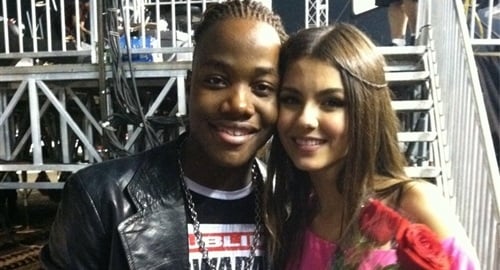 Nickelodeon star Victoria Justice, who was recently dumped by her boyfriend Ray-Ray for her failure to “grow dat ass”, is trying her hand at love once again. This time Victoria Justice is shacking up with Ray-Ray’s cousin Lawrence, also known as the “urban” Mr Potato Head.

Like Victoria Justice, Lawrence is also something of an entertainer. He is known throughout the hood for the joy his enormous head brings. Lawrence can often be seen sprinting through the neighborhood streets with a gang of admirers close behind, rocks in hand pelting his freakishly large dome.

All this attention has helped Victoria Justice’s new boyfriend to catch his big break, as famed comedian and movie producer Tyler Perry has cast Lawrence in the role of “Rocky” for his new ethnic remake of the 1985 Cher classic “Mask”. Surely with this type of heat behind him, Lawrence and his potato head are destined for stardom, and Victoria Justice appears to be well positioned for the ride.